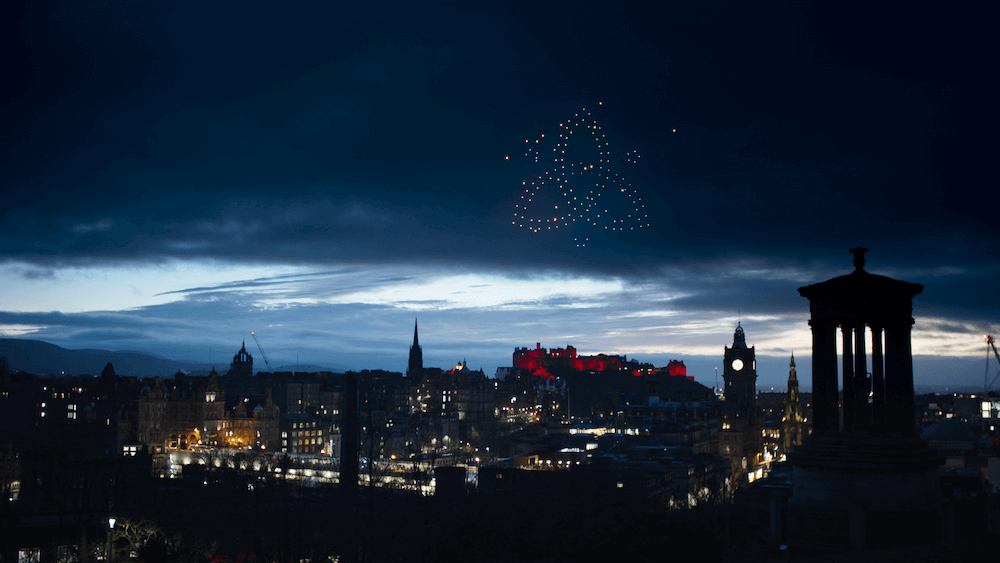 Firework displays have been around for almost as long as history has been written. Famously originating in ancient China, they’ve been ever-present at major celebrations, theme parks, and bonfires throughout living memory — because up until now, there hasn’t been much in the way of competition.

Recently, that’s changed, thanks to the advent of the drone light show. Drones can now serve the same function as fireworks, except that they hold several significant advantages.

A company taking advantage of this new function are Celestial, a Somerset-based drone-art company specialising in large-scale outdoor drone displays. They’re bullish about the prospect that the technology will ultimately supersede traditional firework displays.

Celestial describes their drones as akin to pixels: they fly up into the night sky, and, by flying into a given shape and changing colours, they are able to create incredible images that just a few years ago would have seemed impossible.

Drones can be induced to fly away from one another, creating a firework-like explosion in the sky.

They can also go in the other direction, creating an implosion. In fact, they can go up, down, or in any direction you like. They can therefore create complex three-dimensional shapes, like faces or corporate logos.

Of course, this analogy isn’t quite complete, since the pixels that make up the display on your phone, TV, or smart-watch aren’t able to move around the display — they can only sit in one location at a time. But drones acting as pixels can actually move — and they can move in a 3D space.

Thus, a drone display is unlike anything else out there. The closest real point of comparison is three-dimensional holography — except drone displays are a lot further along than holograms.

The novelty of this technology means that we’re certain to see applications and uses that no one has yet thought of. After all, this is an artistic medium. As exciting as these new displays might be, they might be the modern equivalent of ‘Arrival of a Train at La Ciotat’.

Since drones are able to communicate with each other extremely quickly, they’re able to perform incredibly sophisticated manoeuvres, without human intervention. In fact, human involvement would make formation flying of this kind incredibly difficult, since the formation is almost always incredibly tight, with just inches separating the craft in many cases.

But one aspect to getting these shows up and running is obviously insurance. Tony Martin Managing Director commented:

“Moonrock have been central to Celestial’s ability to successfully deliver not just the creative shows that are now our signature, but also the phenomenal growth the company is experiencing. Without Moonrock’s practical support and expertise, our journey to becoming a global company would have been far, far more challenging. So, thanks to Moonrock and to Simon Ritterbrand in particular for his responsiveness and creative problem solving.”

The most obvious benefit to drone light shows is that they can be used again and again. For example, the New Year’s Eve firework display around the London Eye costs several million pounds each year. And, once that money is spent, it’s literally up in smoke. You can’t land a firework and launch it again!

Drones, by contrast, can be launched multiple times. Moreover, they can be serviced in between displays, and updated with new software and capabilities after they’ve been constructed. So, you might have a different display every time, without having to buy a new fleet of drones.

We should also consider noise and environmental impact. While a fleet of drones taking off isn’t exactly quiet, it’s a lot quieter than a firework, and it’s unlikely to disturb wildlife and pets. Moreover, there’s no risk of a stray drone causing a wildfire in the way that a stray firework might.

A drone display can also be put on in environments where fireworks would never be permissible, such as in tight spaces between buildings, and in places where wildfires are a risk.

For smaller one-off displays, like those you might put on in your back garden, fireworks will still have a purpose. But for bigger events, expect to see drones crop up much more often.

As such, the drone light show almost certainly represents the shape of things to come when it comes to outdoor displays.

What are drone light shows?

You’ve probably seen an individual drone in action either in a park or on television, but that is a far cry from large numbers of drones working in unison to produce a spectacular light display. How exactly do drones coordinate both their movement and their lighting to achieve the end result? We explain below.

How does a drone display work?

A drone display relies on drones being connected in a network, or ‘drone swarm’. They’re issued instructions from a computer program, which is used to choreograph them into formation. Each drone is piloted from the ground by a computer, which knows exactly where the drones need to be at every given moment of the performance.

Since drone displays are outdoors, you can’t really rely on them not to be influenced by a slight bit of wind. When you’re flying that close to one another, you need to constantly report your location, so that tiny adjustments can be made.

For this reason, multiple redundant radio transmitters are used. Drones fly up in the sky, so they tend to have a natural advantage when it comes to resisting WiFi interference. But robust encryption is still required to ensure that the display can’t be interfered with.

What drones are used for drone displays?

Drones used for this application aren’t simply picked up off the shelf — they’re highly specialised, with a lightweight construction and an incredibly bright LED light strapped to the underside. The light can be taken through a range of RGB colours, giving it the ability to create just about every kind of image imaginable.

Just because these drones are controlled by a computer doesn’t mean that everything they do is pre-recorded. Celestial’s drones can react to things like music in real time, allowing for displays at concerts that feel organic without compromising on spectacle.

The company’s founders here draw explicit inspiration from events in the natural world, like flocks of starlings and shoals of fish. These things are incredibly beautiful and complex because they are able to react to the environment around them.

Among the most compelling demonstrations of the potential of drone-powered displays is Celestial’s Edinburgh Hogmanay 2020 film, which uses drone footage captured in the highlands of Scotland, superimposed over famous landmarks around Edinburgh.

The lockdown meant that the drone displays couldn’t be put on for real over the Scottish Capital, but the resulting film remains an impressive showcase of what can be done — and of what the future holds for outdoor displays in general.

In 2021, Amnesty International commissioned Celestial to create a special new drone display, commemorating the organisation’s 60th anniversary. The company duly obliged, paying tribute to the dove drawn by Pablo Picasso created for the 10th anniversary. Amnesty’s ethical values resonated strongly with those of Celestial, which made the project a ‘dream’ for the drone company.

Given the spectacular impact that drone displays have had on the few occasions that they’ve been showcased, we should expect to see a fairly rapid rise in interest in them over the years to come. And it’s companies like Celestial who are leading the way!

To find out more, get in touch.