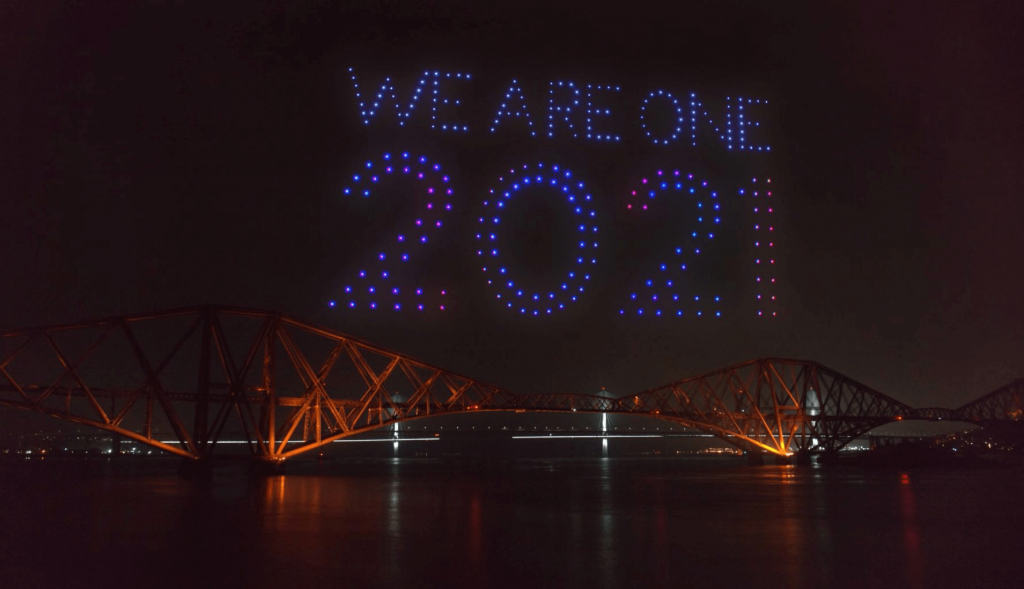 Fireworks have been synonymous with big public events and celebrations for hundreds of years. But the world has changed a lot since they were first invented, both socially and environmentally, so could it be that these exploding missiles in the night sky have become outdated? Do drones now make the best fireworks alternative?

As more innovative technology is harnessed in almost every area of human life, choreographed drone light shows are emerging as the most likely successor of traditional fireworks and surpass them in more ways than one, including:

This article takes a look at why fireworks are now long past their shelf life and some of the most prevalent reasons that make drones the best fireworks alternative.

Most people know that fireworks aren’t great for the environment. Packed full of toxic elements, fireworks release greenhouse gasses that are amongst some of the main contributors to climate change, including carbon dioxide, carbon monoxide and nitrogen.

When they explode, their by-products have the potential to contaminate the air, water and soil. In various studies, these chemicals have also been linked to the exacerbation of a number of respiratory conditions, including COPD and asthma. Children’s lungs are also particularly susceptible to the pollution that fireworks produce, meaning traditional firework shows may not be as family-friendly as you once thought.

So, what makes drones the best alternative? John Hopkins, co-founder of Celestial, explains:

“Fireworks are single use, they release carbon into the atmosphere, they explode in the air and put rubbish on the ground, and they scare the animals. And the biggest problem is that they start fires, and we are now living in an era of wildfires.

For all those reasons, drones make the best fireworks alternative. They don’t start fires, they don’t scare the animals, they are not single-use, and the great thing about them is that we can power them using renewable energy sources.”

Along with diminishing the risk of wildfires and relying on renewable energy sources, having the lowest carbon footprint possible is incredibly important at Celestial. As a result, we’re currently working on critical plans to use solar powered mega batteries to power their drones while on the road.

Along with the obvious environmental benefits, there’s a whole array of reasons why drones make the best fireworks alternative, including the fact that they go above and beyond the creative limitations of fireworks.

When it comes down to it, fireworks are creatively outdated. People love the spectacle of a big fireworks display, but it’s also something that people have seen time and again. Meanwhile, drone light shows are fresh and new, and there are infinite possibilities of what we can achieve creatively in the night sky.

“Using drone displays, the sky becomes a giant three dimensional screen that functions as an interactive and immersive digital system that can connect to humans on the ground as well as just being stand alone displays in the sky.”

The creative potential of drone displays can be seen in some of Celestial’s most recent work, including projects for Greenpeace, Amnesty International and Edinburgh’s Hogmanay. At Celestial, we’ve only just begun to scratch the surface of what is possible with drone displays, and the sky is truly the limit.

So, why is the enhanced creative capability of drones so vital? Well, it all comes down to the reaction we’re able to elicit from our audiences.

Stories are what make us human. They have the innate ability to connect us emotionally and create a collective sense of human connection. Scientifically, encountering stories that resonate with us are known to boost oxytocin levels, a hormone that plays an important role in social bonding and enhances feelings of trust, compassion and empathy.

This means that the emotional impact that we can create by telling stories in the night sky using drone displays far outweighs the more visceral monotonous impact that fireworks have.

Fireworks, when they explode, are exciting. It’s a big spectacle, but does it move people profoundly? Does it push them to tears? Does it reconnect people psychologically with the stars and universe at a primal level?

Fireworks may be limited in this capacity, but meanwhile, stars have always been central to our ability to connect and tell stories. Drone light shows have the ability to recreate and enhance this ancient connection through a new and exciting modern medium.

“I think what we (Celestial) do is harness the stars and bring them to life. And by using them to create a narrative, we’re able to affect people on deeper levels than fireworks probably could.”

Ultimately, Celestial’s approach of bringing the stars in the night sky to life through a compelling and immersive experience is able to inspire a profound emotional connection in its audience and makes them an obvious natural successor to outdated fireworks.

So, what makes drones the best fireworks alternative?

As humanity faces a growing climate crisis and works to save the planet, marking occasions by blowing stuff up now feels in bad taste and is no longer tenable.

It only seems apt that our collective celebrations are marked with an alternative to traditional fireworks that is both green and represents the kind of collective progress that many of us want to strive for as we head into the future. At Celestial, our goal is to use drones for good, which is reflected in the work we do. If you’d like to see more of what we’re working on, click here to see our latest films, or get in touch to work with us.