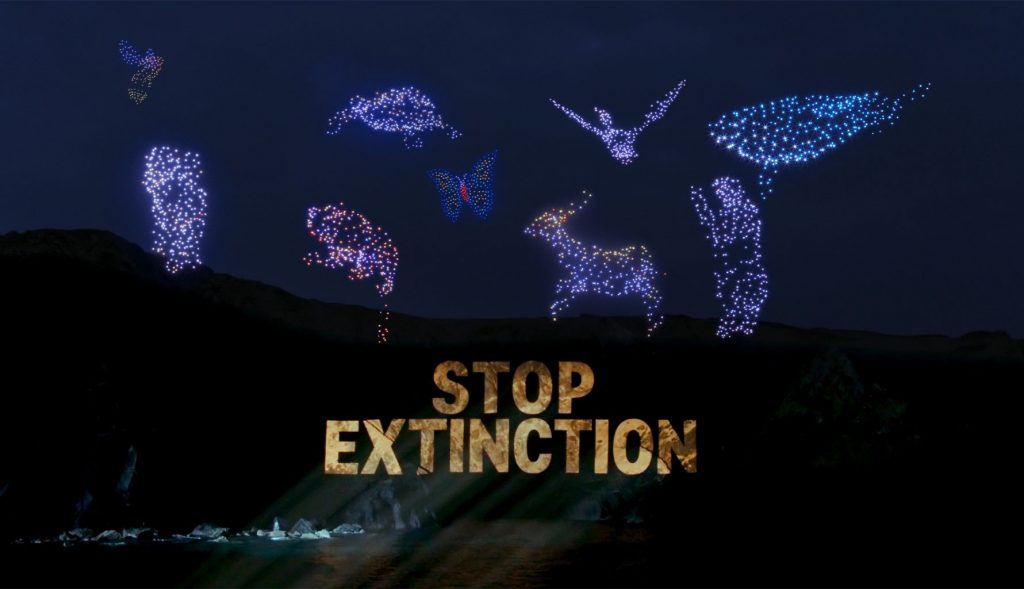 Pioneering drone art company Celestial have teamed up with Greenpeace to create 300 Drones, 1 Message: Act Now, a powerful film that shows drones taking the shape of animals journeying through the night sky from every part of the planet to Cornwall, to deliver a hard-hitting message about extinction during G7 ‘ACT NOW’ in Carbis Bay.

Using Celestial’s innovative propriety technologies and cutting-edge drone fleet – currently the largest in the UK – this ethereal projection of animals, a world-first made possible by Greenpeace’s partners P.O.W. (Projections On Walls), are blended with stunning drone animations and heartfelt narration about hopes for a greener future.

The drones use 3D animation techniques to cast giant animals into the night sky to create stunning imagery, in a brand-new tech-driven artform that was premiered at Edinburgh’s Hogmanay 2021, and last month used to recreate Picasso’s iconic dove and the Amnesty candle logo in Freedom Flight, a special one-off film mark Amnesty’s 60th Anniversary.

The drone display is paired with an evocative score created by Emmy-nominated composer and folk artist Hannah Peel. Hannah, who is also a BBC Radio 3 broadcaster, captures the soul of the project by incorporating the haunting sounds of extinct animals into her score. The music was recorded live in Belfast and donated by the Ulster Orchestra.

“We are extremely proud to have produced a project that we hope will play some small role in making this world a greener place for future generations. It’s been yet another crazy adventure and steep learning curve for Celestial. Huge gratitude goes to Greenpeace for commissioning and supporting us on this ground-breaking project. A big shout out to our projection collaborators P.O.W. and once again, a heartfelt thanks to the entire team at Celestial for all the long hours and another stellar piece of work.

“This film is a beautiful amalgamation of art, activism and cutting-edge technology but its message is simple. World leaders must act now if we are to tackle the climate and nature crisis. The G7 cannot be another target setting exercise resulting only in wasted time, political chest-thumping and more empty promises that might as well be written in the sand of Carbis Bay Beach. We need bold commitments, but they must also be urgently delivered. World leaders have the power to tackle the mounting but interconnected crises we face, but only if they act now.”

Greenpeace is using the film to call on the leaders of seven of the largest economies and the EU to raise their ambitions for tackling these crises and take meaningful action to halt the devastation that they are causing.

Heads of government from Canada, France, Germany, Italy, Japan, the United Kingdom, and the United States are expected to travel to south-western UK county in June for the G7 Summit. Ahead of important environmental talks at COP26 later this year, the climate crisis is top of the agenda for the world leaders at the June summit.

Click here to see the full catalogue of Celestial’s work.