4th of July drone shows are fast becoming a new trend you should know about.

Maybe this sounds surprising. After all, isn’t this momentous holiday all about gathering with family and friends, heading out to watch the parade, and taking in the huge firework displays your home town puts on?

While the incredible parades and social aspects of Independence day aren’t going anywhere soon, the use of fireworks is starting to get called into question. With good reason, too.

In this article, we’ll take a look at the huge risks fireworks pose and look at why we believe drone light shows make the best alternatives for our 4th of July celebrations.

Why are firework displays so popular on the 4th of July?

Independence day is a huge annual celebration of nationhood, where millions come together to commemorate the passage of the Declaration of Independence by the Continental Congress back in 1776.

But why are firework so heavily associated with this great American holiday?

You might be surprises to hear that, as much as fireworks in the U.S. are associated with American independence, these displays were originally introduced to America in displays of Royal pageantry.

England’s King Henry VII’s wedding in 1486 was the first known use of fireworks at a national celebration.

By the time of the American Revolution, firework displays had become a go-to way to celebrate national prosperity and patriotism, so it only seemed natural to incorporate colorful explosives into the celebrations.

This trend has continued ever since… until now.

What’s the problem with fireworks?

Fireworks have become synonymous with the 4th of July, but is this a tradition we can really continue in the long run?

The short answer is no.

Many Americans are waking up to the reality that pyrotechnics are no longer a safe or sustainable practice, and it’s time we look for greener alternatives to replace fireworks.

Let’s take a look at the evidence.

Wildfires are on the increase, not just in the U.S. but around the world.

This is because the climate crisis continues to cause soaring temperatures that result in dried-out (and more flammable) vegetation, increasing the probability of large-scale wildfires.

This has devastating effects. For example, in 2018, it was reported that fireworks caused an estimated 19,500 fires and caused five deaths, 46 civilian injuries, and $105 million in direct property damage.

Not only this, but in 2018, U.S. hospital emergency rooms treated an estimated 9,100 people for fireworks-related injuries, with children under 15 years old accounting for more than a third of the injuries, meaning firework displays may not be as family-friendly as you once thought.

Wildfires aren’t the only damage caused by fireworks.

Fireworks are packed full of toxic elements and release greenhouse gasses that contribute to climate change, including carbon dioxide, carbon monoxide and nitrogen.

You can see for yourself the harmful chemicals that each color firework contains below. When they explode, their by-products can potentially contaminate the air, water and soil.

Not only that, but they are single-use and land on the ground, creating trash on the very land the 4th of July celebrates.

In scientific studies, the chemicals fireworks contaminate the earth which have also been linked to the worsening of respiratory conditions, including COPD and asthma. Children’s lungs are also particularly susceptible to the pollution that fireworks produce.

In fact, there’s plenty of data to showcase the huge spike in air pollution in five major U.S. cities during the 4th of July – as shown below. 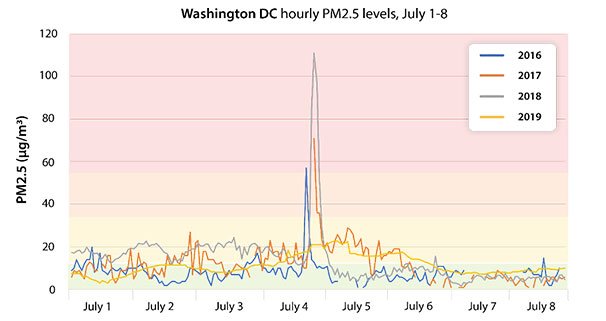 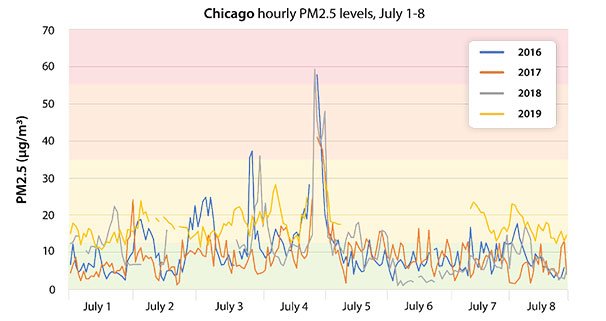 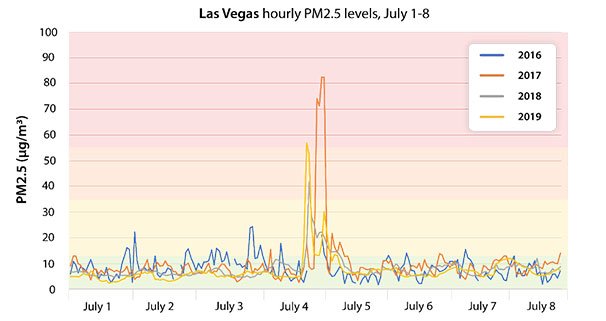 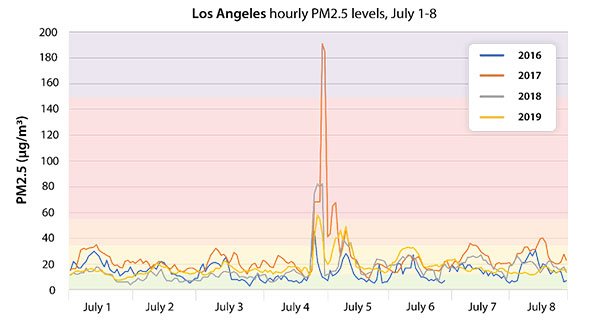 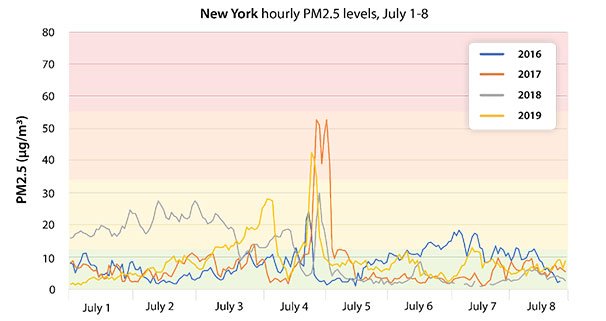 As debates around how to reduce air pollution continue to build, fireworks are surely one of the contributors that are simple enough to replace.

If you have pets, you’ll already be well aware of the stress fireworks cause animals.

The frightening explosions cause our beloved animals’ instincts to kick in, which tell them they need to run and hide for safety and leave animals confused, disorientated, lost, in a state of severe shock, or even dead.

As reported by PETA, fireworks have caused pets to injure themselves, get lost, and even go blind.

But is there really a better alternative that protects our environment, our pets, and our wildlife during the 4th of July celebrations?

Why do drone shows make the best firework alternative?

Drone shows offer the perfect fireworks replacement for the 4th of July celebrations.

This is because drone shows don’t start fires, they don’t poison the earth and the air, they don’t scare the animals, and they are not single-use.

Another great thing about our drone displays at Celestial is that we also power them using renewable energy sources, making them a truly green alternative to traditional fireworks.

Looking beyond the damage that fireworks cause, drone light shows also offer an innovative new medium to mark what is one of the U.S.’s most iconic annual events.

Instead of simply watching colors explode in the sky, drone displays allow us to educate audiences and tell stories, all on the world’s largest canvas: the night sky.

This is because the night sky becomes a giant three-dimensional screen that functions as an interactive and immersive digital system, connecting to humans on the ground as well as just being a stand-alone display in the sky.

If you ask us, there are few live experiences as showstopping as one of our drone shows. Just see for yourself: