The Magic of Celestial’s Cinematic Storytelling 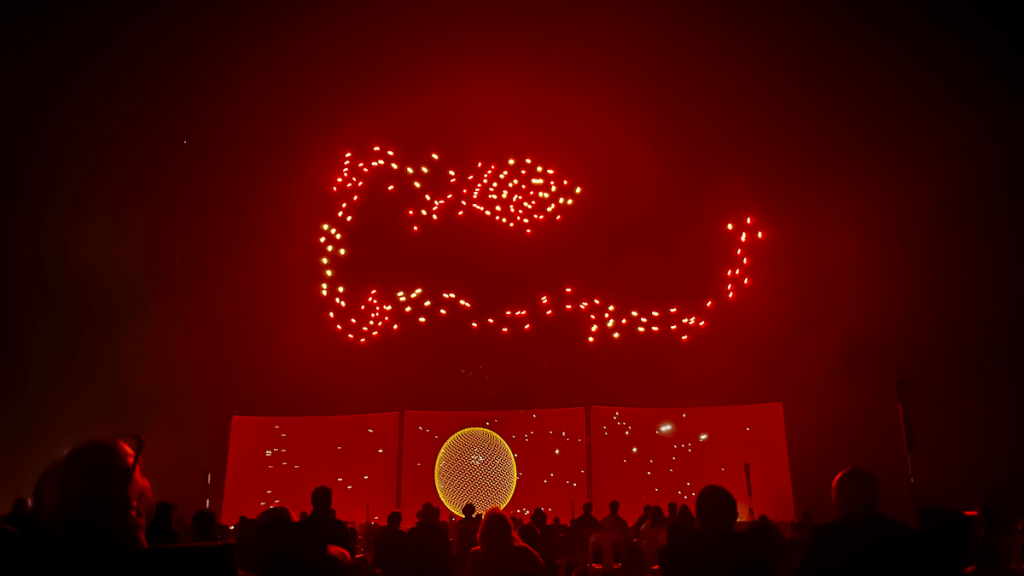 After all, there’s nothing quite like looking up and watching as the night sky is transformed into an endless canvas for huge, captivating, moving imagery created by hundreds of carefully choreographed, illuminated drones.

But this isn’t something that just happens. It takes months (sometimes more) of meticulous planning and preparation before a drone show is ready to be showcased to the public.

Most drone displays are already boundary breakers in their own right, so how does Celestial take things to the next level time and again? The secret ingredient: cinematic storytelling.

Whether it’s in the form of a live show or a prerecorded film, cinematic storytelling takes the entire experience to new, unprecedented heights. This article explores how Celestial creates a touch of cinema-like magic across both its epic live shows and iconic films.

All great cinematic storytelling starts with a narrative that is compelling, meaningful, and leaves a lasting impact.

This is where Celestial comes into its own.

As a company with strong ethical values, Celestial focus on working with organisations that want to champion worthy causes such as social unity, environmental protection, or spreading a sense of hope where it’s thin on the ground.

Part of this is using the medium of their drone shows to provide a crucial voice piece for the voiceless. Celestial aims to shine a light on people’s diverse and collective experiences and wisdom through their narratives because this is where the Goldust for compelling narratives lies.

This is why Celestial works with so many talented contributors, from award-winning composers and cultural icons to local creatives and schoolchildren with big ideas. By bringing in a range of perspectives, they tell vital stories that educate, entertain, and encourage empathy.

You can find out more about who Celestial’s many contributors are by checking out the various projects on our stories page.

Celestial’s cinematic storytelling comes to life in their live shows too.

Combining hundreds of drones against the dramatic backdrop of the night sky with huge projection screens, ground lights, and surround sound turns an outdoor venue into an immersive experience that is captivating for both the eyes and ears.

With thousands of people gathered to watch the cinematic display, the pressure is on to ensure that the show is perfect. This means running through every single scenario and eventuality in rehearsals so that when it comes to the live performance, there are no hiccups.

Cameras are another crucial element in a live Celestial show. Not only do they provide different vantage points for those watching, but they also help to capture the spirit and atmosphere of the event so that it can be live-streamed and relived again and again.

The end result is a film festival-like atmosphere. Coupled with the powerful narratives that Celestial weaves into their live shows, it’s no wonder that they’re often described as being ‘spellbinding’ and ‘mesmerising’.

You can find out more about what it takes to create the ultimate live drone show experience here.

Live drone shows are always going to be special events, but cinematic storytelling really comes into its own when it’s combined with the art of film-making.

This couldn’t happen without the strong and diverse skillsets in the Celestial team – but it also helps that there’s an experienced director and filmmaker on board.

One of the co-founders, John Hopkins, is an award-winning filmmaker. Before launching Celestial, he accumulated over two decades of writing and directing high-end TV commercials and feature films. His iconic commercial of Yeo Valley is often voted in the top 10 TV ads of the twenty-first century. With a number of feature films under his belt, it’s no wonder that Celestial excels at cinematic drone shows like no other.

Just as in live shows, cinematic storytelling is weaved into the fabric of Celestial’s films. Animation, ground cameras, and drone cameras are used to create an experience that is both visually and emotionally impactful.

What sets them apart is the way in which they use cinematic storytelling to bring these themes and topics to life in a new and innovative way.

To see the magic brought to life, we recommend checking out the Greenpeace film below.

Celestial’s cinematic storytelling is something that is truly special.

By weaving inspiring, impactful narratives into both live shows and films, they are able to educate, entertain, and encourage empathy. If you’re looking for an immersive and impactful experience, then you need to look no further than a Celestial drone light show. To find out more about what you can achieve by working with Celestial, get in touch.