6 Types of Drone Show To Remember For A Lifetime 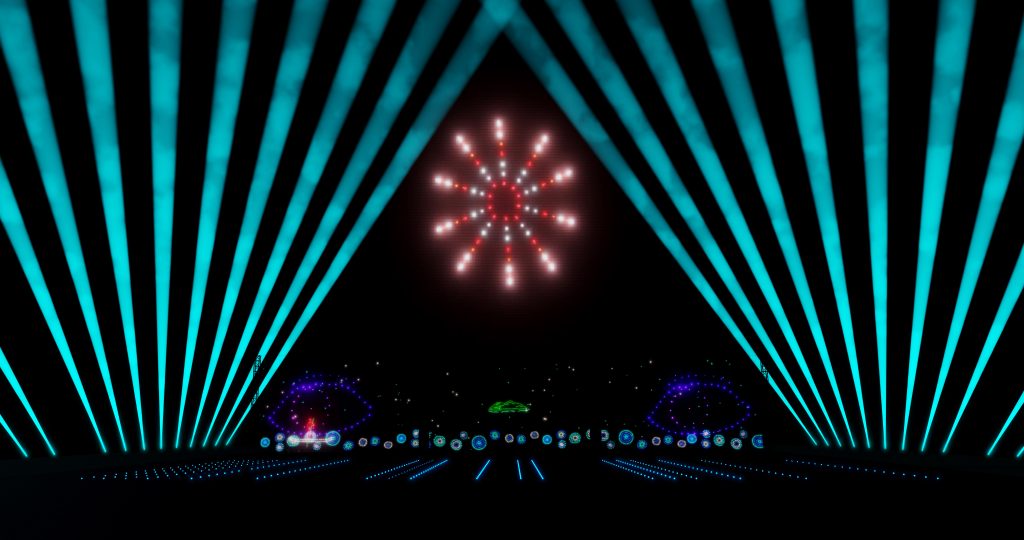 Drones have taken the world by storm. One of the most exciting uses for drones is sky shows and entertainment. A drone show can be a breathtaking and awe-inspiring experience and a unique way to promote your business or brand, so what types of drone show are out there?

This article will show you the different types of drone show and how they can mesmerise your target audience with Celestial’s cinematic storytelling techniques.

Drone shows are positioned to establish themselves as a standard at music festivals worldwide as music enthusiasts look for life-changing experiences.

A drone show is a perfect way to promote a music festival. The flying display is the most effective and unforgettable way to engage your audience. So it’s no wonder festival organisers want to create bigger and better experiences than in previous years.

We’re already witnessing the impact of this cutting-edge new technology at some of the most significant events around the world, such as Burning Man and Coachella in the U.S.

The drones will captivate festival-goers with their ability to fly above the crowd and create a stunning storytelling display. In addition, the art drones can perform elegant patterns and designs, creating a striking visual for all those watching below.

Drone displays’ ability to engage and interact with viewers is one of their most fascinating features. Thanks to our technological advancements, we can now employ drone screens to make interactive experiences unlike anything else.

To enable drones to interact with performers in real-time, for instance, Celestial is now investigating the usage of motion capture technology. This will allow drone displays to be utilised to improve live performances, giving audiences a genuinely immersive experience.

Drones are the new, safer alternative to fireworks.

Fireworks have been a staple of American independence celebrations for hundreds of years, but they’ve become increasingly popular in recent years. As a result, fireworks sales have risen dramatically over the last decade.

This year’s 4th of July celebration saw the most significant fireworks sales in U.S. history—with Americans spending an estimated $923 million on fireworks this year alone. Unfortunately, while these sales may be suitable for business, they’re not so great for our environment—after all, those fireworks aren’t biodegradable.

Luckily, there’s an easy way to replace your next 4th of July or New Year’s Eve celebration: immersive drone light shows that create storytelling art in the night sky.

Drone displays use LED lights that create mesmerising patterns and make your event look like something out of a sci-fi movie while being much more environmentally friendly than traditional fireworks displays.

Watch our breathtaking display celebrating the 2022 New Year in Melbourne.

If you are looking for a new way to attract visitors and impress potential clients, look no further than drone art displays.

A drone show is an incredible way to engage your audience, as they provide a unique experience that cannot be replicated in any other way.

It’s an engaging and captivating form of art that can be used in various ways, depending on the theme of your park.

From the moment your customers arrive at your theme park, they will be immersed in a world of drone art. The drones themselves can draw, paint, and sculpt in the sky in ways that would be impossible for humans alone.

This spellbinding six-minute spectacle of colour-changing drone swarms centres around Sleeping Beauty Castle and culminates in a small Mickey Mouse silhouette spinning inside an orb of stars – it’s sure to take visitors’ breath away.

It marks an exciting new era for Disneyland Paris, as drone technology offers a dazzling array of creative possibilities. From its drone displays representing iconic images to its wildfire popularity among fans, young and old, Disney D-Light is set to revolutionise how we experience theme parks, delighting guests with its luxury.

A Drone Show for Product Marketing

Drone shows for brand activation are an excellent opportunity for brands to showcase new products and technologies to their target audience.

People are still talking about a successful marketing campaign that optimised drone shows in 2017. People marvelled at the sight of a virtual ‘Warrior Princess’ soaring above the iconic Los Angeles skyline.

Warner Bros held a memorable celebration for the Wonder Woman  Home Entertainment release with the assistance of 300 drones dancing in the sky.

It was an event like no other – decadently organised and executed with skill, leaving fans inspired and awestruck by Warner Bros’ creativity and commitment to marketing on a grand scale.

If you want people to get excited about your new product, consider using drone shows at your next launch party. They’re effective because they make it easy for people to see the details of your product in a way that feels personal and intimate, which is precisely what people want when making big purchases.

The displays can be used at trade shows, conferences or other events with an existing audience. The aim is not only to uniquely promote the product but also any brand associated with it.

Enhance the Victory at Sporting Events

When it comes to promoting a team, there’s no better way to do it than with a drone show. Drones can fly over the stadium and project images across the crowd in real time, allowing fans to see their heroes in a new light.

It’s like being in the front row; if you’re lucky enough to be at one of these events, you’ll have the best seat in the house.

Recently, documentaries about sports teams, like Welcome to Wrexham, have become a popular trend as their effective power of storytelling and narrative captivate the audience, and the emotion behind the local teams brings people together.

At Celestial, we use creative storytelling, narration and emotion in our drone art displays to enchant the audience below, switching the electronic screen to the biggest screen in the world: the sky.

Displaying a cinematic drone display above an ecstatic crowd can enhance the feeling of victory, the drones dancing through the sound of fans celebrating can create an experience like no other.

We created a unique spectacle for Manchester City in the Premier League to a global audience, click here to see the victory.

Power of The Arts: Artivism

From the earliest days of modern drone technology, drones have been used to create hypnotising art, and artivism is the use of art to raise awareness and activism.

Artivism can be used to raise awareness about a cause or as a form of protest with drone displays. Drones are a powerful tool for artists and activists, and the sky is no longer the limit for their creativity.

According to studies, artivism is more effective than conventional activism. The messaging underlying activist efforts, which are frequently more memorable, is received more favourably by audiences.

At Celestial, we believe that art can inspire change, so we use drones to spread their message and make people think differently about the world.

For example, we use our unique creative designs to focus on social and environmental issues. One of the artivism drone shows was SKY SONG at Adelaide Fringe Festival, the world’s first feature-length drone art show.

The narrative showcased incredible First Nation art alongside Celestial’s remarkable visual storytelling; we wanted to bring attention to the atrocities of colonisation and the stolen generations while reawakening the memory that universal wisdom unites us all.

The breathtaking drone display will be captured through evocative cinematography so anyone can watch it endless times.

Now that you’ve learned about the various types of drone shows that Celestial can offer, we want to ensure you feel confident in choosing drone light shows for your event or brand.

Displaying such cutting-edge technology to captivate your audience is an unforgettable experience. This can be achieved by combining the visual thrills of aerial drones with the artistic elements and originality of fine arts. Now is the time to embrace drone technology as an innovative display medium.

Our team is ready to help you create a cinematic sky show perfect for your event, an elaborate spectacle or an intimate performance. We’ll take care of all the details—from programming the drones and setting up the production to designing your show and ensuring it runs smoothly.

Contact us today to learn more about how we can help create a unique drone show for your event.